This game is really something. I remember trying to play text adventures on my Amiga over 20 years ago and I sucked at it, mainly because my english wasn't good enough. I tried 'Hibernated 1' on almost all the emulators I have installed on Linux and in Linux terminal with Frotz. I have to admit that I'm very impressed with Your work. You made versions of the game for probably all the best retro computers out there. This is some serious contribution to the retro world and there's even the web browser version. WOW!

I recommend playing this game on systems (real or emulated) that support 80 column mode like Sam Coupe with CP/M (ProDOS) or Linux terminal using Cool-Retro-Term, because green on black/phosphor fits the sci-fi atmosphere of the game.

This is how it looks in Linux terminal using Cool-Retro-Term and Frotz: 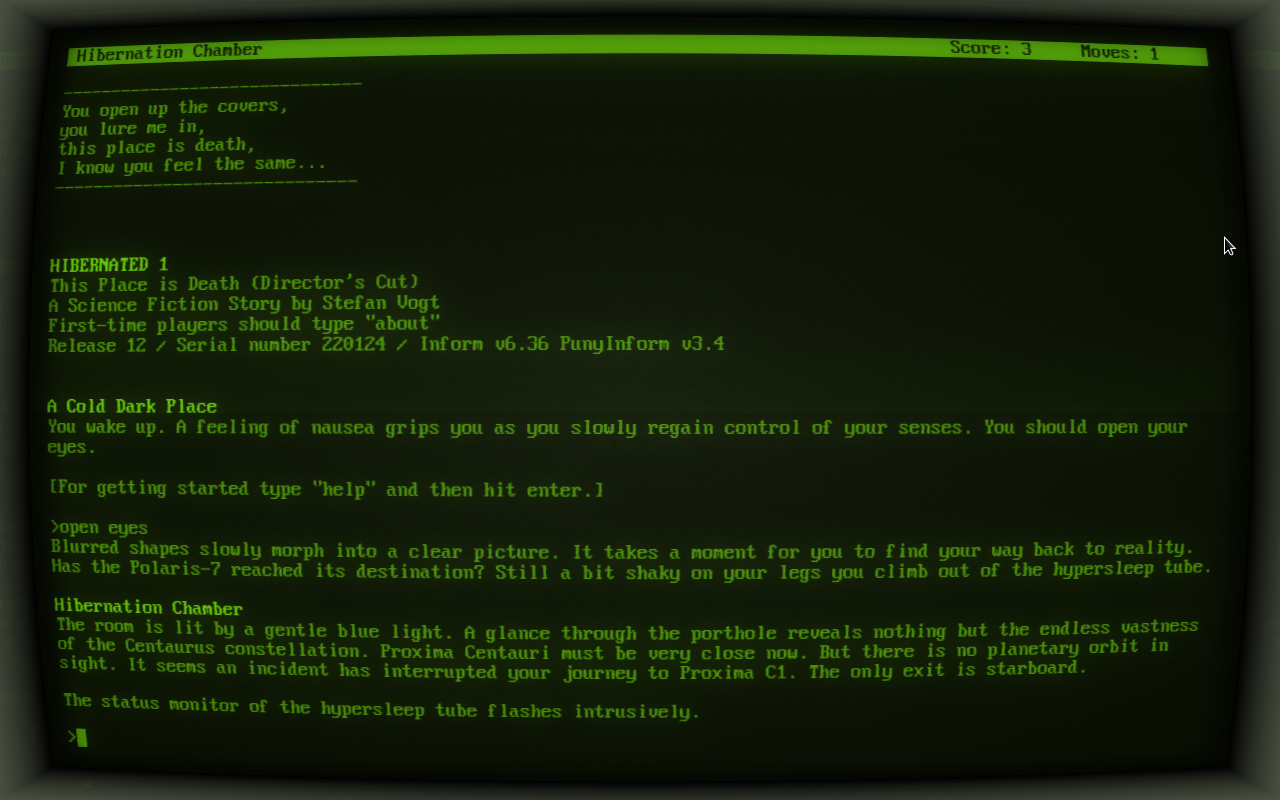 Issue resolved. It was a problem with the SD device used to load the game.

Fantastic game ! I write IF and i really loved this game..i bought the physical version .

How Many rooms and objets in this directory cut Hibernated ?

I really enjoyed this one, playing in it both C64 and CPC version.

Can't wait for the followup!

Thank you so much! I am sure you're going to love the sequel :)

I don't know how feasible it is but hopefully it's possible.

Hi, let me have a look into this. I am not sure if that is possible, I'll have to ask the guys who do the Ozmoo interpreter, because when you select the C128 target, the Ozmoo build script automatically generates a .D71 image.

Awesome, yes it does make use of the Extra RAM.

Didn't see this until now.

When building for C128, D71 disk image is the default target, but D64 and D81 are fully supported as well. And regardless of this, the interpreter uses 100+ KB of RAM for game data, and it can use an REU if you have one. Also note that the game starts on the screen (40 col or 80 col) that is active when you type RUN.

Hi Stefan,
Having some issues getting the game to run on an expanded C16 (64Kb, effectively a Plus4) using an SD2IEC.  Game gets to the splash screen and then just hangs.  Any ideas?

That's very weird. I will check if the same problem happens on my Plus/4 together with my SD2IEC. It could have something to do with the picture loader, which is not my code (provided by Ozmoo). I'll get back to you ASAP!

Hi Stefan.
With apologies, I think this may be a problem at this end.
Other 64Kb games are also causing issues.  I'm looking in to it on the hardware!  Would appreciate the check, but it looks like it may be a local fault.

Hi, no worries. Yeah I just came to the same conclusion. I tested the game on my Plus/4 and it loaded up just perfectly with the SD2IEC. It must be a local hardware issue. Fingers crossed you're able to find it! Cheers

Thank you so much! You're welcome! Glad you like it!

I don't know if I commented yet, didn't see any from me. I just wanted to say great job on this! The cassette version was finally what made me pull the trigger and buy this. I love making custom sleeves for my tapes. The game is really fun and the puzzles are just hard enough to get me stuck occasionally, but not ridiculous...except for the hand in the bowl part. I had the idea and I just didn't word it the right way and was stuck there for days wandering around the ship. I haven't finished it yet, but I certainly will. I also bough the sequel in hopes that it encourages you to make more tape adventures for the 64!

Stefan, first of all, thanks for your time and effort to bring a nice text adventure nowadays. Although I just finished it (including the add-on as well) recently, I have to say that despite the old two-word logic (which for experienced adventurers was odd till you get the hang of it), it was enjoyable with some nice puzzles included. The story was interesting too, including the addition of Io and the interaction between Olivia and it.

It's nice to hear that Hibernated 2 is under development (I guess), and a third part will finish this nice space trilogy.

The only downfall is the saving/loading routine. Even if you install the game on hard disk, it still searches for the floppy disk to save. There was a fix for the Amiga version of course, but hope later adventures will be able to run and save from a hard disk (I don't know if that's a limitation of DAAD).

Already supported of course by buying the physical copy of the game.

Ouch, I must have missed your message for some reason. Yes, that's a DAAD limitation. Cheers and thank you so much for your support!

Looks good! Any chance of a Next port? 😉

The game can be played without issues on the Next. In fact, the Next Team and I have teamed up some time ago and Hibernated is already in the list of games that came with your Next, so you even won’t need to download it from here :)

Awsome! I’ll get straight on that. I really enjoyed Curse if Rabenstein too :D

just got done playing this. had a great time with it. I often think about the subject you've presented and its a plausible possibilty in my mind. I've never done a text adventure before but it was a great intro for me. Looking forward to your others.

I just love the game and the atmosphere.

I bought the physical version for my C64 at polyplay.xyz and I look forward playing any successor titles :-) So please support Stefan so he can do more such awesome games in the future.

@Stefan: Just one thing plz. Isn't it possible to override savegames? When using an existing savegame filename it will cause an error message.

That's a limitation of the C64 filesystem itself, so for the moment it is not possible. You might want to play Eight Feet Under, which is an addon for Hibernated 1, if you haven't already. Cheers!

This is a great game! Any chance for you to make a version with graphics in it like you did in the Curse of Rabenstein? That would be an awesome upgrade. I think it would be OK if it needs to load up the graphics every now and then. If you have every played the C64 game Mindfighter, then that's the kind of graphics I'm thinking about. Would add loads of atmosphere into an already great game. Keep up the good work!

The Hibernated series will remain text only unfortunately, which kinda is my trademark. With Rabenstein I intentionally tried to create a graphic adventure. I‘m glad you like it! Cheers

Hey I've received the Atari ST game Stefan. I cannot wait to open the box and see what's inside!! Thank you :)

Just finished the game. Loved it  - played the C64 version. You got me stumped there two or three times, but I can't say any of the puzzles are way too complicated (except where the parser requires "eat" instead of a simple "use" perhaps). The atmosphere is pretty good too - certainly reminiscent of popular game culture. The opening kind of reminds me of Level 9's "Snowball".

Congratulations on the use of DAAD parser - being Portuguese the Aventuras AD titles (or Spanish text adventures in general) played a big part in my imaginary. Of course the story of how supposedly Andrés Samudio (head of AD) was left hanging by Tim Gilberts is very interesting on its own - there's a "recent" interview - by Karnevi  that tells the story (from Samudio's perspective).

Also added the game to the Interactive Fiction Database - please alter the details as you see fit, of course - here's the link.

Cheers and keep up the good work!

Thank you so much, I'm glad you enjoyed it. The C64 version got a 87% score in the recent Zzap!64 annual, I'm glad there is so much appreciation. You may be excited to know that there is a physical, boxed release coming in early December via Poly.Play, containing feelies and also coming with "Eight Feet Under", a standalone Hibernated 1 Addon. The opening actually is a homage to Infocom's "The Hitchhiker's Guide to the Galaxy". I never played Snowball but I acquired the trilogy some months ago and promised myself I'll catch up soon. Yes, Tim Gilberts was my mentor in this. We know each other very well. With the blessing of Andrés Samudio we fully recovered DAAD Adventure Writer recently. You can find it here.

Very enjoyable game - it reminds of old times. I'd like to see a score counter and a more helpful hint system, though...

Thanks for playing the game. In case you’re stuck, there is a solution up on CASA.

Thank you very much for the info and keep up your good work.

Excellent writing, lots to explore, and plenty of puzzles that will challenge you though not drive you mad. Get playing ...

Thank you so much for the kind words, I'm glad you like it :)