Have you ever wondered what the robot spider did when it went into the wall to help Olivia? In this Hibernated 1 addon, you will see the events on the stranded alien ship through the eyes of an unusual and rather unexpected protagonist: Vermin Extermination Unit 4 aka Vlad. Eight Feet Under reveals a previously unknown part of the Hibernated 1 events, so it's essential to complete the main game first. The addon takes a less narrative and more puzzle-oriented approach. Even though Eight Feet Under still has a tale to tell, it's Hibernated 2 where Olivia's great story will continue.

For now prepare to return to Vega with Vlad, save Olivia and Io from the eerie dangers and secrets lurking in the depths of the stranded alien ship and experience four exciting chapters:

I. Closer to the Stars
II. The Queen of the Swamp Crawlers
III. Breaking Barriers
IV. Kingdom of the Sting Tail Scourges

TEXT ADVENTURES IN THE MODERN ERA

Hibernated 1 and the addon Eight Feet Under are following the paths of the legendary adventures from Infocom and Level 9, but it try to meet modern era expectations, so that the most profound game genre of the 80s still works today.

PARSER LOGIC: Eight Feet Under is a text-only adventure. It comes with a very sophisticated parser that is no longer restricted to the two-word-logic you remember from Hibernated 1. This is quite a fundamental change in the gameplay which you have to keep in mind. The logic varies from simple VERB NOUN combinations e.g. OPERATE TERMINAL to more complex statements like USE TERMINAL WITH KEYCARD. So if you want to use one thing with another, be sure to retain a VERB NOUN NOUN logic. If you just type USE KEYCARD you won't get further as the parser expects you to be more precise in what you're trying to do. USE KEYCARD WITH TERMINAL notably is a different cup of tea. Where it makes linguistic sense, you can swap the two nouns and the parser will know.

SYNONYMS: The game comes with many synonyms to enhance the gameplay. You already know that from Hibernated 1 and the way the adventure understands you in what you're aiming to achieve has been greatly expanded and improved. So OPERATE TERMINAL WITH KEYCARD or UNLOCK TERMINAL WITH KEYARD and PUT KEYCARD IN TERMINAL, all would work very well. The example also tells you that PUT is not synonym for DROP like in some adventure games. We thought PUT KEYCARD IN TERMINAL just makes more sense. If you want to DROP something you explicitly have to write DROP OBJECT.

INTERACTION: The objects you urgently need to interact with to complete the game are visible under YOU NOTICE.

DISK / TAPE OPERATIONS: You can SAVE and LOAD your progress at any time.

COMMANDS: "Guess the verb" can pretty much stay in the 80s so here is an overview of the commands (without synonyms) necessary to win this game: GET, DROP, INSTALL, USE, EXAMINE, TYPE, OPEN, SEARCH. As you can see even when the game understands very complex statements, it all comes down to an easy set of commands.

EXAMINE / EXPLAIN: A pretty important but anachronistic practice is to EXAMINE objects you can interact with, so you learn more about them or get useful hints. We extensively improved this behaviour in comparsion to Hibernated 1. In Eight Feet Under you can EXAMINE much that is written in the room descriptions, regardless whether you can interact with it or not. We even went one step further and Vlad is able to EXPLAIN you things. The EXPLAIN command is for something mentioned in room descritions but not in the field of vision. Let Vlad EXPLAIN GRAVITATIONAL FIELD in the first room on the star deck, or let him EXPLAIN SHIELDS. The EXPLAIN command is also not bound to locations, which makes sense. When you're in the first room on the star deck try to EXPLAIN STAR SYSTEM. Vlad will have an answer for you. Sometimes the boundaries between EXAMINE and EXPLAIN blur, but the parser will know. So still in the first room on the star deck, which is the room directly after you entered the portal, try to EXPLAIN SPACE. Since you're out in space and you actually see it, EXAMINE SPACE will give you the same result. Note that the EXPLAIN feature is experimental and may not make it in future games.

COMMON OPERATIONS: Type REDESCRIBE if you want to read the room description again. Type INVENTORY to have a look at the items you're carrying. INVENTORY will also give you an overview of your built-in modules. Vlad is a robot and can be expanded. Let him EXPLAIN you his modules.  The most common four operations have a short form: you can write R instead of REDESCRIBE get the room description again, I to check your inventory, X to EXAMINE an object, XP to EXPLAIN something.

CARRYING OBJECTS: Vlad is a small robot and thus his carry-claw may carry only one item at a time.

USING YOUR BUILT-IN MODULES: The logic for your modules is always USE MODULE ON OBJECT. This logic retains the synonyms, for example: PUT CONNECTOR IN INTERFACE.

ENDING THE GAME: You can QUIT anytime. Be sure to save your progress before you do so.

MOVEMENT: On a space ship, there are no cardinal directions. While Hibernated 1 actually made use of North, South, East and West for movement, we felt this needs improvement. Cardinal directions are always bound to a planet. So while in space you now navigate with the logic from Infocom's Starfall:

You can abbreviate the movement with: F, A, P, S.

Please note that NORTH, SOUTH, EAST and WEST remain implemented as synonyms for the nautical terminology.

DYING: You can't die in Eight Feet Under.

DEAD ENDS: There are no dead ends. You can try everything without blocking your progress. If you have an idea, just try it. If you're on the right track you might even get an additional hint.

DISK/TAPE OPERATIONS: You may SAVE or LOAD your progress anytime. Type QUIT to end your adventure.

WHAT ELSE TO SAY?

* Draw a map. That's the first thing to consider when playing an adventure game. You're lost without a map.

* Examine a lot because it can give you useful hints. Not to mention the pinch of black humor that results in some amazing hilarious jokes and references. And you won't want to be missing most of the fun, won't you? Also let Vlad explain what you think needs explanation.

* Here is a little jump-start for the first chapter. It's urgent that you follow the advice you get when using the status terminal. Search for the missing maintenance robots first before you try to repair the transmitter or decontaminate the star deck. Each one of said robots has a module built-in that you will need to complete the other goals.

* We might have added nice credits to Colossal Cave Adventure and a certain group of developers that is said to be not an Ocean. Just saying.

We are confident that a solution will soon be available at CASA.

Hallo! I'm a little bit confused, or maybe blinde. I've bought Hibernated 1 from Poly Play and this add-on should be included but where should I put in the password I've found in the game box?

That's not necessary anymore. Previously the addon was only available via password but during the Pandemic I decided to give the addon to everyone :)

Ah! Thank you. Should have clicked on Download! -facepalm-

It took me an evening to finish the add-on, which was enjoyable in the end, despite much easier than the main game (but of course that's not the case). The merge between the main story and this add-on was very nicely executed and interesting. Even the various built-in modules and the navigation system is a bonus.

Generally, well executed add-ons, add to the atmosphere of the concept in general, therefore I'm hoping for add-ons for the second and/or third game as well.

Keep up the good work Stefan.

Hi. Great game. I also write games but with inform and ink.

Can you tell me how many objects and verbs. What is the size in ko let to the text for story itself ?

I am not sure to be honest. Maybe 140 objects, I have never counted the verbs :)

Glad you like it! It was written with DAAD Adventure Writer https://github.com/daad-adventure-writer/daad

Just finished Hibernated1. Will soon start the add-on, so I can get ready for Part2

having to make a diagram to explain port and starboard,  aft and fore is hilarious. also lol FAPS. 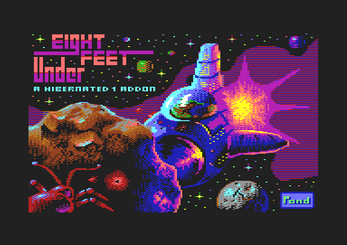 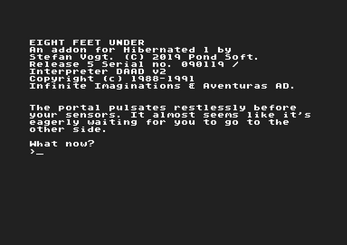 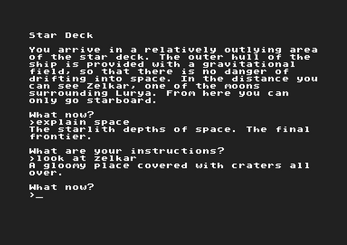 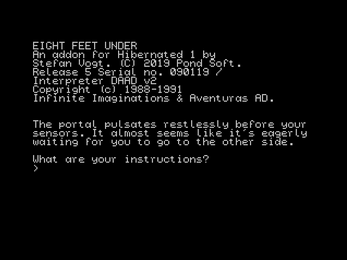 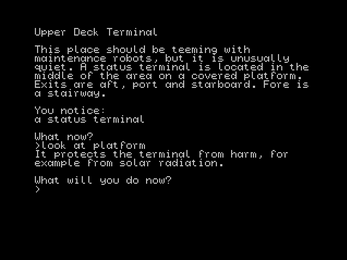 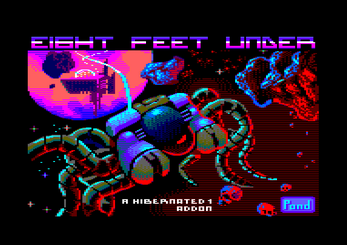 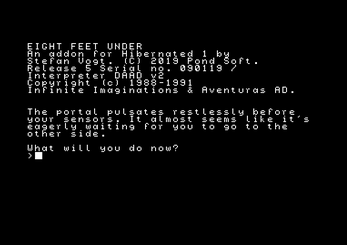 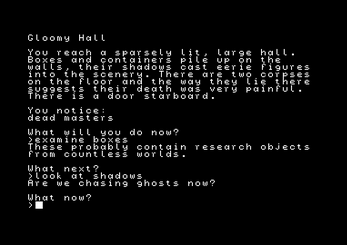 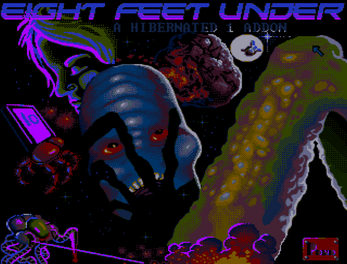 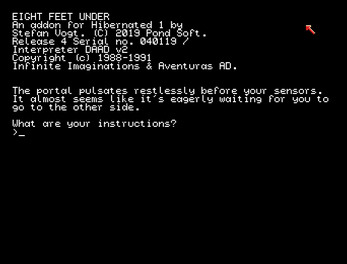 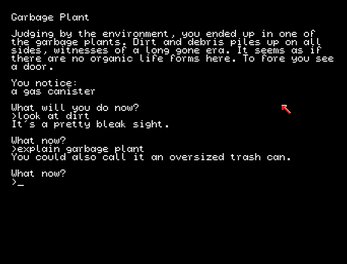 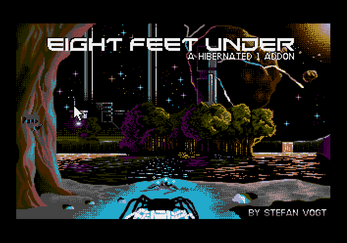 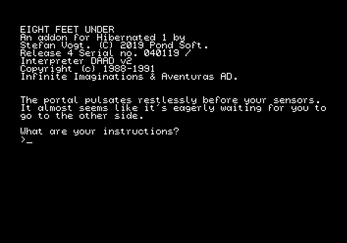 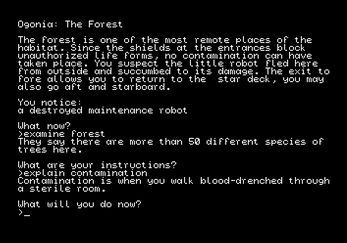