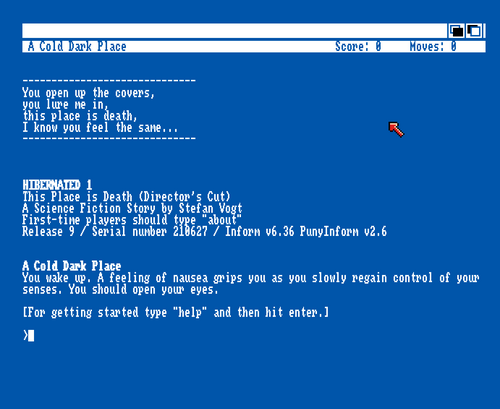 I just rolled out Release 9 of Hibernated 1 Director's Cut and my guess is it will be the last for a while. No new bugs nor typos have surfaced for some time now and with the newest changes, I basically did everything I could in terms of performance. A few minor things have changed under the hood, most prominently the Amiga version, which uses a new, Z-machine version 5 capable interpreter. I'll resume working on Hibernated 2 now, so that everyone will finally get their anticipated sequel. Stay safe out there!

Hi, Stefan. I'm the guy (Pedro Timóteo) who bothered you on Facebook some time ago about the status bar problems in the .z5 version on the Spectrum Next. After Garry Lancaster added a fix for that in Zxzvm 1.16, the problem with printing only the necessary parts (leaving parts of a previous room's name if it was longer) was fixed, but the previous releases (6 and 8) were printing one extra character on the status bar, which moved to the next line (covering any actual text character there).

I'm happy to report that release 9 seems to fix that, too, and is looking perfect on my Next! (Though the fixed Zxzvm isn't yet part of any official release of the Next distribution, you'd have to get it from Gitlab, so it's probably better to keep recommending the .z3 version for now.)

I did find a typo -- there's an "occassionally" (should be "occasionally", just one S) in the response to the HELP command. But I don't think this demands a new release. :)

thank you so much, I fixed the typo! Yes, the Amiga interpreter had problems with Puny's DrawStatusLine() routine, too. That's why R9 comes with a more compatible way of drawing the status line. What Puny does is absolutely conform though. It's the interpreters who miss the implementation for all the dirty secrets of the Z-machine. But yeah, I knew when the new DrawStatusLine code was in, that this likely will fix ZXZVM's way of rendering the status bar in z5 games :)

I'll recommend z5 again for the update for Next :)